Jean Barr Back To Artist-Faculty 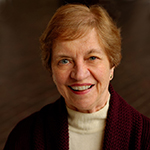 Jean Barr is professor of piano accompanying and chamber music at the Eastman School of Music. The first keyboard artist in the United States to be awarded a doctoral degree in accompanying, she studied at the University of Southern California with Gwendolyn Koldofsky and at Northwestern University with Gui Mombaerts. Early in her career, she was accompanist for the master classes of Jascha Heifetz, Gregor Piatigorsky, William Primrose, and Martial Singher. Dr. Barr has performed in the U.S. and abroad with distinguished artists including Carmen Balthrop, James Dunham, Pierre Fournier, Eduard Melkus, Igor Ozim, François Rabbath, Gabor Rejto, Mstislav Rostropovich, Ivan Straus, Andor Toth, and Zvi Zeitlin, among others. She has lectured and taught on four of the seven continents. A pioneer in her field, Jean Barr has sought to develop a broad appreciation of the collaborative arts. In recent years she organized chamber music concerts for the National Conference on Piano Pedagogy and subsequently for national conventions of the Music Teachers National Association. She was also the first chair of MTNA’s collaborative performance advisory committee and served as the chair for the National Conference on Keyboard Pedagogy’s committee on collaborative performance. Before joining the Eastman faculty, Dr. Barr taught at the University of Southern California, the University of Texas at Austin, Arizona State University, and the Music Academy of the West in Santa Barbara, California. Throughout her career, Jean Barr has received the Eisenhart Award for Excellence in Teaching (1994), the Susan B. Anthony Lifetime Achievement Award (2004), and the Music Teachers National Association Achievement Award (2008).