Simin Ganatra Back To Artist-Faculty 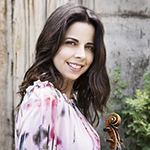 Simin Ganatra, violin, has won wide recognition for her performances throughout the United States and abroad. She has been described by critics as talented and unique and heralded for "creating a miraculous sense of flow and otherworldly beauty." She has performed in such prestigious venues as Lincoln Center's Alice Tully Hall, the Corcoran Gallery, and Carnegie's Weill Recital Hall. Collaborations include performances with Michael Tree, Toby Hoffman, and the St. Lawrence Quartet. She is the recipient of several awards and prizes, including the Naumburg Chamber Music Award, top prizes at the Concert Artists Guild Competition and the Coleman Chamber Music Competition, and first prizes in the Union League of Chicago Competition, the Pasadena Instrumental Competition, the Minnesota Sinfonia Competition, and the Schubert Club Competition. Originally from Los Angeles, Ganatra studied with Idell Low, Robert Lipsett, and most recently Roland and Almita Vamos. She is a graduate of the Oberlin Conservatory, where she was concertmaster of the Oberlin Conservatory Orchestra and recipient of the Louis Kaufman Prize for outstanding performance in chamber music. She is currently on the faculty of Indiana University's Jacobs School of Music and the University of Chicago.