Back To Calendar
With special thanks to the Lowe Foundation in memory of Erma Lowe
Aug 06, 2022
Harris Concert Hall
7:30 PM MT
$75
Import to Calendar

Multiple-Grammy winner and 2020 Musical America Worldwide Instrumentalist of the Year Sharon Isbin returns to Aspen with master sarod player Amjad Ali Khan. Their recording Strings for Peace debuted at number 3 on the Amazon Hot New Releases/World Music bestseller list and rose to number 2 in its first week. Audiophile called it “a wonderful cross-cultural release… a spectacular collaboration exploring North Indian classical music… melody, mystique and mood all wrapped in [a] virtuosic journey… at once calming and exciting, brilliant… like so many beautiful sunrises.”

The sarod and the guitar belong to a common family of stringed musical instruments. Through this collaboration, we strive to preserve the essence of both Indian and Western traditions so they can flow into each other without artistic compromise. Each of the artists brings the spirit of sharing the great unique treasures of their own artistic traditions, as well as finding common ground in Ragas and Medieval modes. The idea is to achieve a cross-fertilization at both the cellular and cosmic levels of two classical music traditions, which are often held to be radically different. This is a blissful dream of a project, infused with the unique amalgamated contributions of artists united under a common aegis, regardless of their diverse backgrounds, cultures, traditions, generations, genders, religions, upbringing, and career paths.
-- Amjad Ali Khan

It is an honor and joy to perform Strings for Peace! The music Amjad Ali Khan has composed for guitar and sarod is sheer genius, and I don’t use this term lightly. In an amazing way, it interweaves our varied musical, spiritual and artistic traditions with mystical beauty, creativity, grace and great emotion.
-- Sharon Isbin

Spanish Work for Solo Guitar
Spanish music is inspired by the rich and passionate tradition of flamenco, an art form many believe evolved in Andalucía with gypsies who traveled there from India. Indeed, one can hear elements of Indian classical music in the cante jondo (deep song) of flamenco, expressed by melismatic embellishments, rhythms and gestures in works of famed classical Spanish composers, including Albéniz and Tárrega. -- Sharon Isbin

AMJAD ALI KHAN: By the Moon
By the Moon is rendered in Raga Behag, a raga that is profoundly associated with the second quarter of the night, set to a 16-beat meter. -- Amaan Ali Bangash and Sharon Isbin

TRAD.: Raga and Folk Music
Raga is like a living entity. A mere scale is not a Raga. A scale is more like a skeleton. Even though the literal meaning of a Raga is Improvisation within a set framework of ascending and descending notes, a Raga must be invoked. It’s interesting to see how music can define and create a region of any country. Folk music is one of the most natural forms of music which is self-taught all over the world. -- Amjad Ali Khan 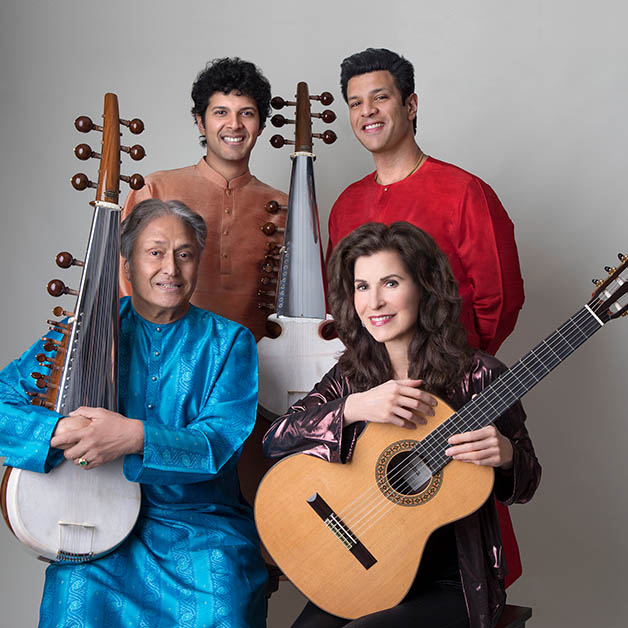