Brook Ferguson Back To Artist-Faculty 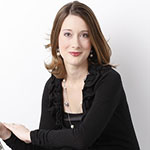 Brook Ferguson, flute, is a versatile solo and orchestral artist. The Miami Herald praised Ferguson’s performance of Carl Nielsen’s Concerto for Flute with the New World Symphony as emotional, pure, and energetic. First prizewinner of the 2009 National Flute Association Young Artist Competition, Ferguson has performed as a concerto soloist with the Colorado Symphony, the New World Symphony, the River Oaks Chamber Orchestra, and the Los Angeles Chamber Orchestra. She has appeared at the prestigious Marlboro Music Festival and Tanglewood Music Center. Ferguson was appointed principal flute of the Colorado Symphony Orchestra in 2010 and has been principal flute of the innovative River Oaks Chamber Orchestra since 2012. Previously, she completed a three-year fellowship with the New World Symphony. She has made guest Principal appearances with the Grand Teton Festival Orchestra, the Seattle Symphony, and the Pittsburgh Symphony Orchestra. Ferguson is a William S. Haynes Artist.