Escher String Quartet Back To Artist-Faculty 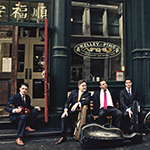 The Escher String Quartet has received acclaim for its expressive, nuanced performances that combine unusual textural clarity with a rich, blended sound. In its New York hometown, the ensemble serves as season artists of the Chamber Music Society of Lincoln Center. Within months of its inception in 2005, the ensemble came to the attention of key musical figures worldwide, such as the Emerson Quartet, Pinchas Zukerman, and Itzhak Perlman. The Quartet has since collaborated with numerous artists including Leon Fleischer, Lynn Harrell, and Joshua Bell. In 2013, the Quartet became one of the very few chamber ensembles to be awarded the prestigious Avery Fisher Career Grant. The Escher Quartet has made a distinctive impression throughout Europe and the United States, performing at venues such as the Amsterdam Concertgebouw, Berlin Konzerthaus, Alice Tully Hall, Kennedy Center, and the Ravinia, Caramoor, and Music@Menlo festivals. Currently quartet-in-residence at Southern Methodist University in Dallas and Tuesday Musical Association in Akron, the Quartet fervently supports the education of young musicians and has given master classes at institutions worldwide. The Escher Quartet takes its name from the Dutch graphic artist M.C. Escher, inspired by Escher’s method of interplay between individual components working together to form a whole.