John Engelkes Back To Artist-Faculty 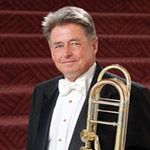 John Engelkes, bass trombone, joined the San Francisco Symphony in 1981. A native of Iowa, he was previously a member of the Baltimore Symphony Orchestra and has also performed with the Minnesota Orchestra and the Florida Symphony. He studied with John Hansen at the University of Northern Iowa, where he received his bachelor’s degree, and later pursued a master's degree at Northwestern University. At Northwestern, he studied with Frank Crisafulli and Edward Kleinhammer of the Chicago Symphony Orchestra. While in Chicago, Mr. Engelkes performed with the Chicago Symphony, Northwestern Wind Ensemble, Northwestern Symphony, Civic Orchestra of Chicago, and the Chicago Pops. Mr. Engelkes has appeared at the Saito Kinen Festival Matsumoto in 2011, the Grand Teton Music Festival, and the Sun Valley Music Festival. A founding member of the Bay Brass, he also serves on the faculty at the San Francisco Conservatory of Music and in 2014 was a guest artist and faculty member of the International Trombone Festival.