Mingjia Liu Back To Artist-Faculty 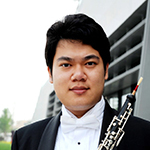 Mingjia Liu joined the San Francisco Opera as principal oboe in 2010. A native of the northern coastal city Qingdao in China, Mingjia was born into a family of art and literature. At the age of twelve, he was enrolled at the Middle School attached to the Central Conservatory of Music in Beijing, where his talents were immediately recognized. He continued his studies in the U.S. at the Oberlin Conservatory of Music. He won a coveted position in the classes of two of the most sought-after oboists of our time, Robert Walters from the Cleveland Orchestra and Alex Klein, former principal oboe with the Chicago Symphony Orchestra. He appeared as a fellowship musician at the Aspen Music Festival and School where he studied under Richard Woodhams and Elaine Douvas. In 2009, at the age of twenty-one, he won the position of principal oboe with the Kansas City Symphony Orchestra. He was also a finalist in several notable auditions such as principal oboe for the Seattle Symphony, the Pacifica Symphony, the San Francisco Symphony, the LA Phil, and the Chicago Symphony. Mingjia has also appeared as a guest artist with the San Francisco Symphony, Los Angeles Philharmonic, Chicago Symphony, and the China National Symphony Orchestra. Recognized not only for his outstanding performing skills, Mingjia Liu is gaining considerable recognition as a teacher both in the United States and abroad. Mr. Liu joined the oboe faculty of the San Francisco Conservatory of Music in 2015 and he appears as a special guest teacher at the Oberlin Conservatory of Music regularly.