Pierre Lapointe Back To Artist-Faculty 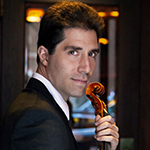 Pierre Lapointe is a Canadian violist. His main teachers were Yaela Hertz Berkson and Calvin Sieb on violin and Paul Yarbrough and Lawrence Dutton on viola. He also studied composition with Steven Gellman while completing his undergraduate degree at the University of Ottawa in 2000. In March 2002, Mr. Lapointe performed one of his own string quartets for the radio show "Jeunes Artistes" of Radio-Canada in Montreal to great acclaim. Two years later, Pierre Lapointe moved to New York in order to study at the Manhattan School of Music and obtained in 2012 a DMA degree for his thesis on Zemlinsky's Second Quartet. Prior to this recognition, he had received a prize in 2004 from Lieutenant-Governor of Quebec for his work at the Gatineau Music Conservatory and was granted a gold medal by the University of Ottawa in 2000 for his undergraduate studies in composition and violin performance. Pierre Lapointe is the violist of the Escher String Quartet since its inception in 2005 and has taught and given masterclasses in places such as La Jolla Summerfest, Music@Menlo, Chamber Music Society of Lincoln Center, Manhattan School of Music PreCollege Division, McGill International String Quartet Academy and the Royal Academy in London. Pierre Lapointe is currently an adjunct professor at the Southern Methodist University in Dallas and plays a viola ingeniously designed and made by Christophe Landon.