Reginald L. Mobley Back To Artist-Faculty 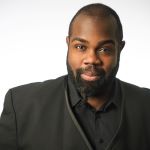 Countertenor Reginald Mobley fully intended to speak his art through watercolors and oil pastels until circumstances demanded that his own voice should speak for itself. Since reducing his visual color palette to the black and white of a score, he’s endeavored to open up a wider spectrum onstage as a highly sought after interpreter of Baroque, Classical and Modern repertoire.

Recent performances of note include his Paris recital debut at the Musée d'Orsay, Handel’s Messiah with The Handel + Haydn Society of Boston, led by Masaaki Suzuki (with which he also had the honor of becoming the first Black person to lead H+H in 2015, the ensemble’s Bicentennial year), and an extensive tour of sixteen concerts around Europe singing Bach’s Matthäus-Passion with the Monteverdi Choir & English Baroque Soloists led by Sir John Eliot Gardiner (which was then recorded for commercial release on Gardiner’s SDG label). Mobley returned to work with the ensemble last season for a further twenty-two concert European tour where international reviews commented on his “purity of timbre” and “homogeneity of tone.” Other recent performances include concerts of Handel’s Messiah with the Royal Scottish National Orchestra, Purcell’s King Arthur with the Academy of Ancient Music in London and Mozart’s Requiem with Orkiestra Historyczna in Poland. Reginald also had two major debuts this season. First, in Germany and Belgium with Balthasar-Neumann-Chor und Ensemble led by Thomas Hengelbrock, performing solo Bach Cantatas and Handel’s Dixit Dominus. Then another concert tour in Germany with the Freiburger Barockorchester in concerts of Purcell and Handel under leadership of Kristian Bezuidenhout.

His profile worldwide continues to develop, with the 2019/20 season seeing his debut with City of Birmingham Symphony Orchestra, followed by a series of concerts in a return invitation with Internationale Bachakademie Stuttgart. He will also appear in Australasia, making his debut in Hong Kong, with Handel’s Messiah, before embarking on an Australian tour to perform a selection of Bach Cantatas. Reginald commences an extensive tour of Australia from Easter 2020, travelling to several cities and prestigious venues, performing a vast array of repertoire including programmes of Bach Cantatas.