Rita Sloan Back To Artist-Faculty 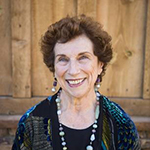 Rita Sloan is acknowledged internationally as a leading teacher of piano, collaborative piano, and chamber music. In 1999, she was appointed a piano faculty member and director of the collaborative piano program at the University of Maryland. As an artist-faculty member at the Aspen Music Festival and School, Ms. Sloan founded their collaborative piano program. Recent residencies and masterclass presentations London’s Royal College of Music, Lithuania’s Academy of Music in Vilnius, and The Juilliard School in New York. Ms. Sloan has performed with orchestras, in recitals, and in chamber music performances throughout the U.S., Europe, South America, and Japan. Ms. Sloan is a founding member of the Aspen Ensemble, which was recently featured on NPR’s Performance Today and is commissioning works from some of America’s leading composers. She has been a guest in many chamber music venues, such as New York’s Bargemusic and the Chicago Symphony Orchestra Chamber Music Series, and has performed with many of today’s leading musicians. Born in Russia to Polish parents, Ms. Sloan graduated from The Juilliard School, where she studied under Martin Canin and Rosina Lhévinne.