Stefan Dohr Back To Artist-Faculty 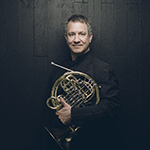 Stefan Dohr is widely regarded as one of the world’s greatest horn players. In addition to being principal horn of the Berlin Philharmonic, Stefan has collaborated as a soloist with the world’s leading conductors, including Sir Simon Rattle, Ingo Metzmacher, Neeme Järvi, Paavo Järvi, Kazushi Ono, Gustavo Gimeno, John Storgårds, and Marc Albrecht, among many others. He has performed concertos with orchestras such as the Berlin Philharmonic, Los Angeles Philharmonic Orchestra, Swedish Radio Symphony Orchestra, Rundfunk-Sinfonieorchester Berlin, Oslo Philharmonic, Orquesta Nacional de España, Shanghai Philharmonic, and Osaka Philharmonic, to name a few. In recent years, he has commissioned works by Herbert Willi, Jorge E. López, Johannes Wallmann, Dai Bo, Toshio Hosokawa, and Wolfgang Rihm. A prolific chamber musician, Stefan is a member of the Ensemble Wien-Berlin, Berlin Philharmonic Chamber Music Society, and the Berlin Philharmonic Octet. He has appeared at the Lucerne, Salzburg, Rheingau and Baden-Baden festivals, and has performed alongside many prominent artists. Stefan has recorded on the Barking Pumpkin, RCA Red, Naxos, Champanella Musica, and Camerata labels. This season, Stefan performs with the BBC Philharmonic, Barcelona Symphony Orchestra, and Lapland Chamber Orchestra as both soloist and conductor. Future seasons include concerto appearances with the Seoul Philharmonic and the Kammerakademie Potsdam, and the Berlin Philharmonic’s performance of Helmut Lachenmann’s upcoming piece for eight horns and orchestra. Stefan studied in Essen and Cologne, starting his professional career at the age of nineteen as principal horn of the Frankfurt Opera and as a guest artist with Ensemble Modern. He held the position of principal horn with the Orchestre Philharmonique de Nice, Deutsche Symphonie-Orchester Berlin, and the Festival Orchestras of Bayreuth & Lucerne before taking up his current post in 1993. Currently, Stefan is a visiting professor at the Royal College of Music, the Sibelius Academy, and a permanent faculty member at the Herbert von Karajan Academy and the Hochschule für Musik Hanns Eisler in Berlin.