Warren Deck Back To Artist-Faculty 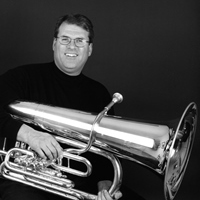 Warren Deck, tuba, has had a long and illustrious career in music performance, education, instrument development, and recording production. A recipient of the International Tuba and Euphonium Association’s Lifetime Achievement Award, he served as principal tuba of the New York Philharmonic for twenty-three years. Warren made his solo debut with the New York Philharmonic performing Roger Kellaway’s Songs of Ascent for Tuba and Orchestra, commissioned by the Philharmonic for Warren and conducted by Zubin Mehta. He has made numerous orchestral recordings under the leadership of such conductors as Leonard Bernstein, Zubin Mehta, and Kurt Masur and in addition, made four recordings with the Canadian Brass. He has also worked as a tonemeister/producer for both solo and ensemble recordings in a wide variety of genres, and has traveled as a clinician throughout the world. Warren currently conducts the Denver Brass, a thirteen-piece brass ensemble founded in 1982. Formerly on the faculty at The Juilliard School for twelve years, he now teaches at the University of Denver’s Lamont School of Music and the Aspen Music Festival and School.