Jeffrey Fair Back To Artist-Faculty 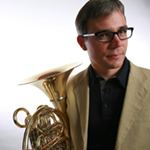 An extensive relationship with the Seattle Chamber Music Festival has led to numerous world premieres as well as performances of much of the standard chamber music repertoire. Other music festival appearances have been as principal horn and faculty member of the Eastern Music Festival, Arizona Music Festival, Mainly Mozart Festival in San Diego, and Festival Mozaic in San Luis Obispo.

Mr. Fair was previously principal horn of the San Antonio Symphony and served on the faculty at the University of Washington for a decade. He completed a Master of Music degree at the Juilliard School as a student of Jerome Ashby. A native of Oklahoma, he received a Bachelor of Music degree from the University of Oklahoma as a student of Eldon Matlick. Mr. Fair is a proud five-year alumnus of the Aspen Music Festival and School.