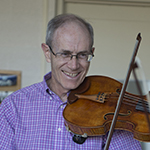 Jeffrey Irvine viola joined the faculty of the Cleveland Institute of Music as the Fynette H. Kulas Professor of Viola in 1999 and is chair of the string division. He was professor of viola at the Oberlin Conservatory of Music from 1983 to 1999 and was also chair of the string division there. His students have gone on to major orchestral, teaching, and chamber music posts across the country and around the world. His students have often been first prizewinners in major viola competitions, including the Primrose Competition, the ASTA National Solo Competition, and the Washington International Competition. Mr. Irvine has given master classes at all of the major music schools in the United States. In addition to teaching at the Aspen Music Festival and School, Mr. Irvine has also taught at the Bowdoin International Music Festival, the Perlman Music Program, the Castleman Quartet Program, and the Heifetz International Music Institute. As a member of the New World String Quartet, Mr. Irvine performed throughout the United States and Europe, including concerts at Carnegie Recital Hall and the Kennedy Center. His teachers have included Heidi Castleman, Martha Katz, William Primrose, and Karen Tuttle. He is married to violist Lynne Ramsey with whom he has two children, Hannah and Christopher. He plays a viola by Hiroshi Iizuka, made in 1993.