Scroll down for full text of Mr. Fletcher's  remarks.

Convocation Speakers
The Aspen Music Festival and School Convocation on Monday, June 24 marked the official beginning of the 2019 season for the 690 music students and 130 artist-faculty in residence this summer. 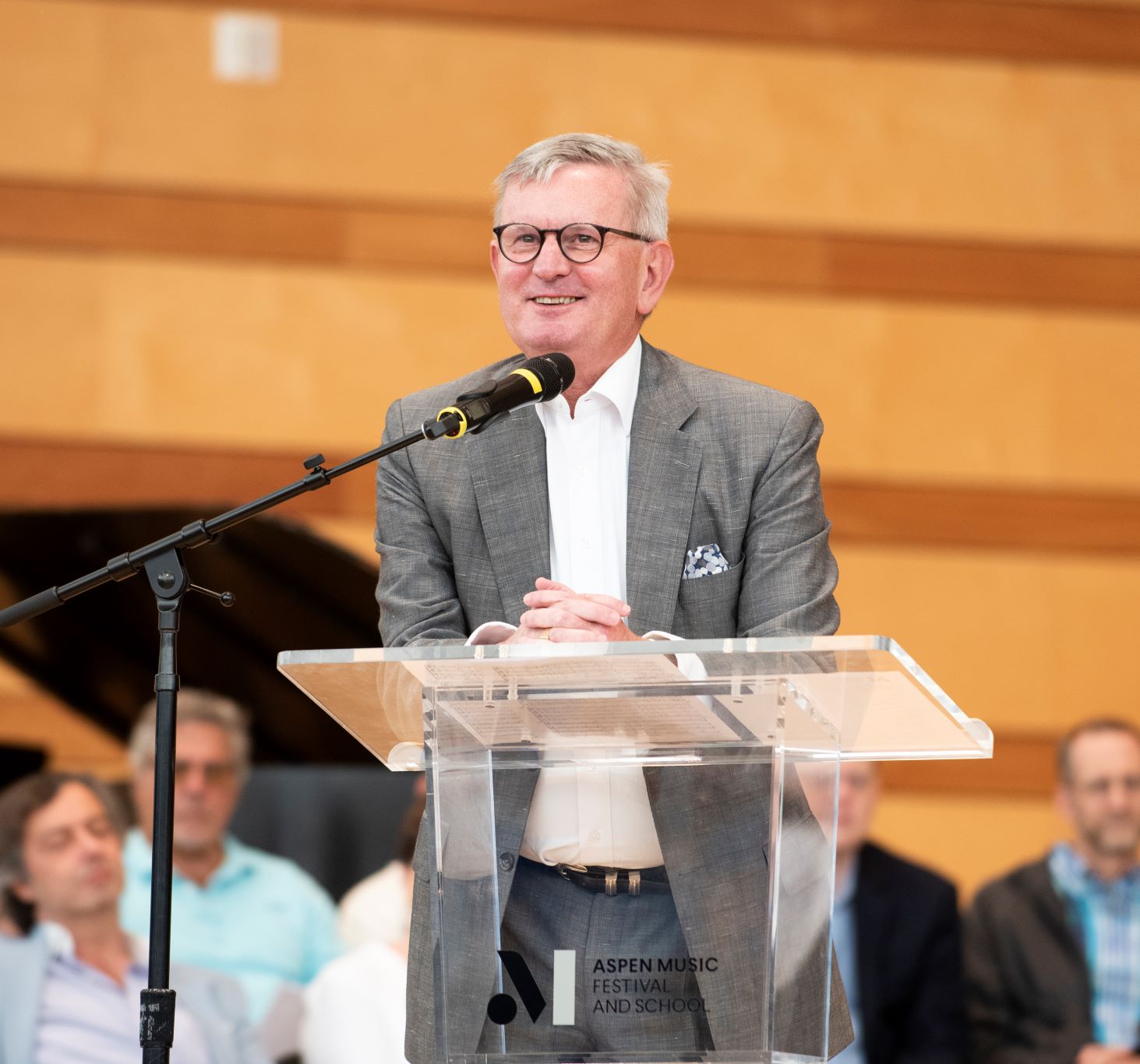 I’d like to talk today about talent, giftedness, and inspiration. I might not say exactly the things you expect.

Last week, I was giving an interview for STRINGS magazine, and the writer asked me if there were any factors I could identify that one sees in young musicians, that are predictors of great success. After I finished answering, she told me she had been worried and even disappointed at first, because I started by talking about “talent.” She, a knowledgeable musician herself, was not sure that talent is that big a thing.

I do think there is such a thing as talent, and one can get very practiced in spotting it. Obviously, there are different kinds of talent. Purely physical ability is one, and it cannot be discounted. Capacity for speed, perhaps confidence for speed, is a good thing, in and of itself. Endurance is a physical gift that can be built up, but that comes more naturally to some than to others. The great Ted Williams had 20/10 vision (that’s better than average), and he felt that it improved his batting and fielding. Naturally, almost all singers have the physical gift of the voice.

My mother was a voice teacher and church musician, and my five siblings and I sang in her choirs. I started out as a pretty good boy soprano. Then my voice started changing, slowly enough that I actually sang a St. Matthew Passion as an alto, having previously sung it as a soprano. Then I was a tenor. Then I was not a tenor. At length, I asked my mother where she thought my voice would land – as a baritone, bass-baritone, maybe even a genuine bass? I didn’t think my temperament would lead me to be a basso-buffo. After a sympathetic pause, she said, “Oh sweetie, you’re a Presbyterian!” There was just nothing in there. I became her rehearsal and studio pianist, which turned out to be one of the best things ever to happen to me. Later, I sang in two paid church choirs, though the music directors asked me not to sing out to the congregation (who would not have wanted to hear that) but, instead, to turn and sing at the other men, so they could hear the right notes. I’m not making this up.

Anyway, there are many physical advantages that can be brought to music-making, and they are not nothing. They also are not much.

A different, and, to me, much more consequential form of talent is emotional or interpretive. Some people just have what seems to be an innate gift for projecting emotion. This is great, because it can take a lot of work and even therapy to develop this on one’s own. When emotional intelligence is matched with interpretive intelligence, something special is happening. The ability truly to understand what is in the music, what the composer has imbedded there, what centuries of tradition have revealed, how it relates to other forms of art and expression, is an ability that can be acquired, but it’s a very moving and exciting thing when it seems to be natural.

On the other hand, it’s not enough. I auditioned for a famous and intentionally frightening piano teacher at Juilliard. Part of his mystique was his extraordinary intellectual brilliance, and, in addition to his primary teacher Isabella Vengerova, he had had personal study with Arnold Schoenberg. In his studio, he had an actual self-portrait by Schoenberg, who had given it to him. He accepted me. I thought it was a great idea to bring Schoenberg’s Opus 19 to my first lesson, along with a Beethoven sonata. After I played, and a long silence, he said, “Well, you play like a composer.” I blushed and thanked him, since that seemed like an amazing compliment, given his history. That’s how little I understood. He said, “No, I mean you think that a few ideas can make up for complete absence of technique!”

Gracefulness on stage is a great talent. This is a trickier one, because not every great musician is graceful on stage; it’s not a requirement. But it’s an advantage. The person who exudes confidence walking on stage, whether that person is five or fifty-five, has already made a great impression on the audience. A person with the coolest of nerves is leagues ahead in the game, though I know many superlative performers who struggle with nerves. A long time ago, I had the task of hiring a counsellor for a school of music. We had interviews, and there was a guy with a fantastic resume who impressed us. In the year he was to begin, I invited him to speak at the opening convocation of that school year. He began with something like this: “I am honored to be able to help you all, because I know how difficult it is to perform. I, myself, wanted to be a musician – [something that had never come up in the interview, by the way] – and I know how terrible it is to be exposed in that way, vulnerable, with hundreds of people just waiting for you to make a mistake….” This was not the empathy I was hoping for.

But he had a point, I guess. Some musicians have a seemingly innate conviction that performing is fun, and that is a beautiful thing.

So physical gifts, emotional gifts, intellectual gifts, psychological gifts – what is the recipe for success?

The real thing is devotion. The word “devotion” has a kinship with love, and if you don’t love not only the tumultuous and exhilarating feelings of performance, but also the meticulous and exhausting routines of practice, you have a big think coming. Devotion also signifies commitment, and there are very few endeavors that humans have created that require as much commitment as music. When I was young, and people would say, “You could be a doctor, or a scientist, or a mathematician, or a judge, or….” I would sincerely say, “The hardest thing I have ever tried to do is to be a musician, and that is why it’s so fascinating to me.” An old saw says that you should only choose a career in music if it’s the only thing you can imagine. I think this is false. I think you choose a career in music because you know it is the thing, against all odds, that will make you the happiest.

That’s what it has been for me.

I’d like to close with a bit of a cautionary note. I have frequently spoken and written about issues that are current, and sometimes troubling, in our world of music. Right now, one of the great orchestras of America, the Baltimore Symphony, is threatened in an existential way. I cannot presume to understand what everyone in Baltimore is experiencing or thinking, but I am certain that a lockout is a tactic unworthy of our beautiful profession. It breaks the bonds of trust and respect which must exist among all who are involved in the enterprise of sustaining a symphony. We must carry out our work understanding what, and who, makes that work possible. Even if some administrators make terrible choices, the profession of administration is a great, and necessary one. I think, in this setting, I don’t need to persuade you that the profession of being a performer is an essential and beautiful one. We also have a profound need for a wonderful audience, and an audience that not only buys tickets, but that is philanthropic. I expect that all classical music organizations depend more than 50% on generosity – on contributed income rather than so-called “earned” income. The expert, and devoted people who make the bridge that is a partnership of givers and artists – the fundraisers – deserve our thanks every day. Every sentence that begins with “The administrators” and is headed to an expression of contempt, is a sentence that needs to be re-thought. But every time administrators treat musicians as exchangeable, they are making a mistake, and possibly a fatal mistake.

As you progress into your careers, be aware that it is not talent that has brought you here, but rather, it is devotion. Talent is a fluke. Devotion is a thing you can practice, nurture, sustain, and depend on. Be devoted every day, and be grateful every day that you can carry on in this beautiful profession.

When I was starting out, many wonderful people told me “Yes,” over and over. I am so grateful to them. Now, it is our joy to be the ones who say to you, “Yes! Yes, you can do this!”