Mark Sparks Back To Artist-Faculty 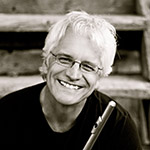 Mark Sparks is principal flutist of the St. Louis Symphony Orchestra and principal flute of the Aspen Chamber Symphony. He has performed in both solo and ensemble roles in the United States, Europe, South America, and Asia, and has made numerous solo appearances with the SLSO, most recently in 2017 under the baton of Bernard Labadie. Mr. Sparks has appeared as guest principal flute with many orchestras, including the New York and Bergen philharmonics, and the Chicago, Pittsburgh, and Cincinnati symphony orchestras, and is the former associate principal flute of the Baltimore Symphony. An enthusiastic teacher, he is a faculty member of DePaul University, and frequently coaches at major training programs such as the New World Symphony and the NYO. He regularly presents master classes and recitals in the U.S. and abroad, and has recorded several solo albums. Mr. Sparks is a contributing editor of Flute Talk magazine. Mr. Sparks earned his Bachelor of Music at Oberlin Conservatory with Robert Willoughby and is alumnus of the Aspen Music Festival and School, where he studied with Nadine Asin. He has been an artist-faculty member at Aspen for twenty-five years.