Stephen Wyrczynski Back To Artist-Faculty 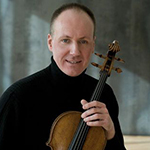 Stephen Wyrczynski is a professor of viola at the Jacobs School of Music at Indiana University. He was a member of the Philadelphia Orchestra for eighteen years, joining them in 1992. As a chamber musician, he has performed with such artists as Joshua Bell, Sarah Chang, Pamela Frank, Edgar Meyer, Vladimir Feltsman, and Dawn Upshaw, playing in many of the North America’s celebrated venues. Mr. Wyrczynski also performs regularly with his artist-faculty colleagues at the Jacobs School and participates in faculty-student collaborations. One such partnership, which he co-founded with his colleague violinist Jorja Fleezanis, is an ongoing exploration of music from the Second Viennese School, in which faculty and students together perform music by Schoenberg, Webern, and Berg. The inaugural concerts took place in a gallery at the Indiana University Art Museum. Here, the audience was able to consider the relationship of the music to exhibited works by Wassily Kandinsky, a personal friend of Schoenberg. Works performed in this series include Schoenberg’s Verklärte Nacht; his First, Second, Third, and Fourth String Quartets; and the Opus 45 String Trio. Also performed were Alban Berg’s Opus 3 String Quartet and Lyric Suite, and Anton Webern’s Bagatelles.