Alex Klein Back To Artist-Faculty 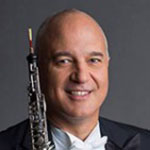 Alex Klein is recognized as one of the world’s leading oboists. A Grammy Award winner, he began his professional career at age eleven in his native Brazil. He was principal oboe with the Chicago Symphony Orchestra and won First Prize in the Geneva International Competition and New York International Oboe Competition. Klein has performed as soloist with the Chicago Symphony Orchestra, Philadelphia Orchestra, Orchestre de la Suisse Romande, and Czech National Symphony, among others. His recordings include concertos written for him by Yano, Sydor, and David Stock. After departing the Chicago Symphony due to the onset of focal dystonia, Klein diversified his music career to perform as a chamber musician, recording artist, and soloist, also adding conducting and music administration, aiming to accelerate the development of musical artistry in Latin America. Klein founded and is artistic director of Santa Catarina Music Festival, Latin America’s largest music festival, and is founder and general director of PRIMA, the Program of Social Inclusion though Music and the Arts, establishing youth and children’s orchestras in the public school system beginning with the areas hardest hit by social risk. He has been a faculty member at Oberlin, University of Washington, Northwestern University, and Roosevelt University, and now teaches at DePaul University.