Christian Colberg Back To Artist-Faculty 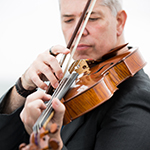 Colberg began his musical studies at the age of five in his native Puerto Rico. Known today for his versatility, Colberg excels as a violinist and violist. In addition, he has also garnered accolades as a composer and a conductor. Recipient of numerous awards including the Alpha Delta Kappa Foundation Fine Arts Grant, Colberg was honored by the House of Representatives of Puerto Rico in 1985, and again by the Senate in 1994 for his achievements in the classical music field. He is a graduate of the Peabody Institute of Music, having studied with Shirley Givens. Mr. Colberg has also been on the violin faculty of the Peabody Institute of Music and on the viola faculty of the Cincinnati College-Conservatory of Music.