Christopher Hanulik Back To Artist-Faculty 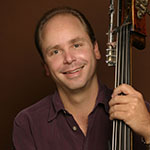 Christopher Hanulik, bass, joined the Los Angeles Philharmonic in 1984 and was appointed principal bass in 1987. Mr. Hanulik has also served as principal bass of the Cleveland Orchestra. During his tenure in Cleveland, he made numerous recordings including Histoire du soldat, conducted by Pierre Boulez for Deutsche Grammophon. He appears regularly with the Los Angeles Philharmonic Chamber Music Society and on the Green Umbrella new music concerts. He has performed with the Miami String Quartet and the Jacques Thibaud String Trio, the Chicago String Quartet, and the Calder Quartet. Mr. Hanulik has also performed at the St. Barth Music Festival, Chamber Music Sedona, and La Jolla Summerfest, and he has served on the faculty of the Cleveland Institute of Music, Kent/Blossom Summer Music Festival, Pepperdine University, and California State University, Northridge. He has given master classes at The Juilliard School, Manhattan School of Music, Indiana University, University of Southern California, and the Eastern Music Festival, in addition to the National University for Music in Cologne, the Hong Kong Academy for the Performing Arts, and the Guildhall School of Music and Drama in London. Mr. Hanulik is currently on the faculties of the University of California, Los Angeles and the Aspen Music Festival and School. Mr. Hanulik attended The Juilliard School where he studied with famed bass pedagogue Homer R. Mensch.