Emily Levin Back To Artist-Faculty 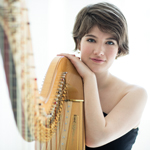 Emily Levin is the principal harpist with the Dallas Symphony Orchestra and Bronze Medal Winner of the Ninth USA International Harp Competition. She has been guest principal harp with the Los Angeles Philharmonic and the Houston Symphony, and regularly appears with the New York Philharmonic. She made her debut at the Ojai Music Festival in 2021; other concerto performances include the Jerusalem, Colorado and West Virginia Symphony Orchestras. She is a laureate of Astral Artists and was a finalist at the 2009 International Harp Contest in Israel. For her debut album, Something Borrowed, the Classical Recording Foundation named her their 2017 Young Artist of the Year. She recently launched GroundWork(s), a project commissioning American composers, one from each state, for harp-centric works premiering in the composer’s hometown.

Levin is artistic director of Fine Arts Chamber Players and Harp Faculty at Southern Methodist University. She studied with Nancy Allen at The Juilliard School and completed undergraduate degrees in Music and History at Indiana University with Susann McDonald, where her honors history thesis discussed the impact of war songs on the French Revolution. She lives in Dallas with her husband, Jon Cziner, and their dogs Charlie and JoJo.