Jacob Nissly Back To Artist-Faculty 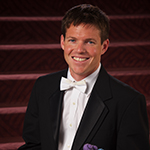 Jacob Nissly is the Principal Percussionist of the San Francisco Symphony, under the direction of Michael Tilson Thomas. Prior to his appointment in San Francisco, Nissly was the Principal Percussionist of the Cleveland Orchestra for two seasons and the Principal Percussionist of the Detroit Symphony Orchestra for one season. Previously, he was a member of the New World Symphony in Miami Beach for two seasons. Nissly is the Co-Chair of the percussion department at the San Francisco Conservatory of Music. Nissly is also a regular coach at the New World Symphony. He has served as a percussion coach for NYO-USA and NYO-2 during the 2017, 2018, and 2019 summers. Nissly holds a Bachelor of Music and Jazz Studies degree from Northwestern University, where he studied with Michael Burritt, James Ross, and Paul Wertico. He received his Master of Music degree from the Juilliard School, where he studied with Greg Zuber and Dan Druckman.