Joaquin Valdepeñas Back To Artist-Faculty 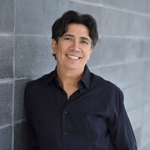 Joaquin Valdepeñas is considered one of the most distinguished clarinetists. A three-time Grammy nominee and two-time Juno Award winner, he began his career as principal clarinetist of the Toronto Symphony Orchestra upon graduation from Yale University. He has a prolific recording career spanning over three dozen recordings, most recently making several recordings with the ARC ensemble on the Chandos label’s Music in Exile Series, and recording the Mozart Clarinet Concerto with the English Chamber Orchestra. Mr. Valdepeñas has appeared at leading music festivals including Aspen, Marlboro, Casals, and the Great Mountains Festival in Korea. He is also the founder of the Amici Chamber Ensemble with which he has commissioned many works and received a Juno Award. A devoted chamber musician, he has collaborated with the American, Calder, Emerson, Muir, Orion, St. Lawrence, Takács, Ying, and Zemlinsky string quartets, as well as the Chamber Music Society of Lincoln Center. Mr. Valdepeñas is an alumnus of the Aspen Music Festival and School, and is resident conductor of the Glenn Gould School at the Royal Conservatory of Music. His former students hold positions in symphony orchestras around the world, including most recently the new principal clarinetist of the Cleveland Orchestra.