Michael Sweeney Back To Artist-Faculty 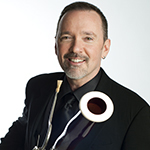 Michael Sweeney has served as Principal Bassoonist of the Toronto Symphony Orchestra since 1989. Over the years, concert reviewers have praised his work consistently commending his “soulful” and “imaginative” playing.

As a soloist, Michael is keenly interested in Early Music and Postmodernist work. In 2003, he commissioned and premiered three new works and subsequently recorded them along with Mozart’s Concerto from 1774. The CD, mozart and well beyond, was enthusiastically and unreservedly praised by Gramophone magazine for its “vitality” and sensitivity, and in particular for Michael’s “excellent interpretation” of Mozart’s Concerto through which he “glides … with stunning suppleness.”

Michael has performed and taught at the Aspen Music Festival and School as an occasional guest since 2013. Additionally, he teaches at the Glenn Gould Professional School of Music in Toronto and has given master classes in Canada and the USA.

Prior to joining the TSO, Michael studied at state universities in California and New York, the Yale School of Music, and University of Southern California with Kay Brightman, Arthur Weisberg, and Norman Herzberg. He also studied musicianship with Joan Panetti at Yale.

Michael is married to Peter Eliot Weiss, who is a writer and a professor of Technical Communication at University of Toronto, Engineering.