Randall Hawes Back To Artist-Faculty 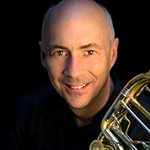 Randall Hawes, bass trombonist, joined the Detroit Symphony Orchestra in 1985. In addition to his tenure with the DSO, Hawes has been a member of the World Orchestra for Peace since 1995 and the Saito-Kinen Orchestra at the Seiji Ozawa Matsumoto Festival since 2011. He has performed with many of the world’s major orchestras including the Boston Symphony, Chicago Symphony, Cleveland Orchestra, Los Angeles Philharmonic, New York Philharmonic, and the Pittsburgh Symphony. He is currently a lecturer at Northwestern University and is a faculty member at the Cleveland Institute of Music, as well as teaching master classes and guest artist appearances in Japan, Europe, and throughout the United States.

Hawes has recorded more than 30 albums with the DSO under music directors Günther Herbig, Neeme Järvi and Leonard Slatkin, and is featured on three CD’s for bass trombone and piano with pianist Kathryn Goodson; he also appears on the recent recording, The Antiphonal Music of Gabrieli with the National Brass Ensemble. He received a bachelor’s degree in music education from Central Michigan University, where he studied with renowned trombone pedagogue, William Rivard.