Timothy Pitts Back To Artist-Faculty 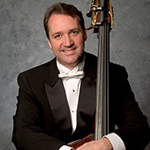 Timothy Pitts, double bass, has distinguished himself as one of the most versatile double bassists of his generation as a soloist, chamber musician, and orchestral musician. Mr. Pitts’s orchestral career began as a member of the Cleveland Orchestra after which he was appointed principal bass of the Houston Symphony, a position he held for seventeen years. He also served as principal double bass with Boston’s Handel and Haydn Society and the Boston Pops Esplanade Orchestra under the direction of John Williams. Mr. Pitts has appeared with Bay Chamber Concerts, the Mainly Mozart Festival, Boston Musica Viva, the Ravinia Festival, and the Pacific Music Festival as well as with the St. Lawrence, Jupiter, and Vermeer quartets and Trio Con Brio Copenhagen. He has collaborated with such artists as Menahem Pressler, Arnold Steinhardt, and Christoph Eschenbach. A frequent orchestral soloist, Mr. Pitts gave the U.S. premier of John Harbison’s Concerto for Bass Viol with the Houston Symphony conducted by Hans Graf. Mr. Pitts has presented classes at the National Orchestral Institute, New World Symphony, Boston University, the San Francisco Conservatory, Indiana University, the Glenn Gould School, and the Pacific Music Festival. He is currently professor of double bass at Rice University’s Shepherd School of Music.