Weston Sprott Back To Artist-Faculty 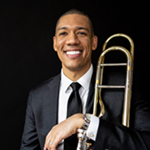 Weston Sprott is a prominent thought leader, administrator, performer, and educator. He is dean and director of The Juilliard School Preparatory Division, leading the Pre-College and the Music Advancement Program (MAP), and is a trombonist in the Metropolitan Opera Orchestra.

Sprott is a champion of diversity and inclusion efforts. His work contributed to the creation of the Black Orchestral Network, the National Alliance for Audition Support, Sphinx Orchestral Partners Auditions Excerpt Competition, and Classical Tahoe Academy, as well as numerous other initiatives that are shifting the classical music landscape. He is a recipient of many awards including the Sphinx Medal of Excellence and Atlanta Symphony’s Aspire Award. He is an active speaker, writer, and consultant for various organizations, conferences, universities, and publications.

His performance career includes orchestral, chamber, and solo work. He has performed with several of the world's leading ensembles and has been a soloist throughout the United States, Europe, South Africa, and Asia. Sprott appears frequently with the Philadelphia Orchestra and has held positions with the Zurich Opera, Pennsylvania Ballet, and Delaware Symphony.

Sprott holds faculty positions at The Juilliard School, Bard College, and Music Academy of the West.